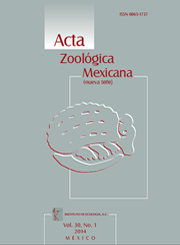 We added four recent records from three new localities for the desert shrew Notiosorex crawfordi, in the Mexican state of Hidalgo. The distribution commonly accepted for this shrew occupies the southern part of the United States of America, and the neighboring region of Northern Mexico (Baja California Norte and Sur, Sonora, Chihuahua, Colima, Tamaulipas, Sinaloa, Durango and Zacatecas). The records confirm the existence of the species in the state and extend its distribution until the municipality of Tetepango, 31 km to SW of the Grutas de Xoxafi and through the municipality of Tulancingo de Bravo, 75.8 km SE of the Grutas de Xoxafi, and 542 km south of the southernmost records recognized in Nuevo Leon. These records come to give certainty of the existence of this species in Hidalgo, since the scarce records and the great distance to the next known accepted locality (3 km SW Galeana, Nuevo Leon). The record most resent was obtained at 2001, and the scarce records made the presence of N. crawfordi in Hidalgo seem uncertain. The new records are located in areas in which developed different types of xeric scrublands, vegetation in which inhabits this shrew commonly. The existence of Notiosorex in Hidalgo will can pass unnoticed because this shrew is considered rare and difficult to capture.